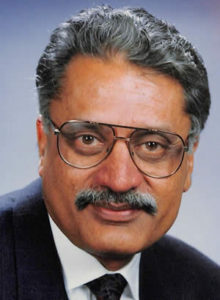 Dr. Gur Sharan Singh was born on the 25th of September, 1936, in the city of Jullundur, Punjab, India. He earned his medical degree at Punjab University in 1959. He moved to North American in 1961, and trained in neurosurgery at the University of Rochester in New York, Queen’s University in Ontario, and at McGill University in Montreal. After a short stint in Victoria, he and his wife, Manju, settled into the community of Kamloops, British Columbia in 1967.

From his first day there, he tirelessly demonstrated integrity, generosity and concern for the residents of the community. At that time, he was the lone neurosurgeon for the entire interior of British Columbia, and served in that capacity for five years until the city of Kelowna hired their own neurosurgeon. Dr. Singh then ran a private practice until 1978, sacrificing the time and activities that we all take for granted following an eight hour work day, to provide scheduled and emergency services for the whole region.

In 1978, a second neurosurgeon was hired, and Dr. Singh took advantage of the sudden “spare time” afforded from being constantly on call, to advocate for improved facilities and management for those requiring brain and spinal cord surgeries. He established a four bed Neuro Unit where patients in need of specialized acute and rehabilitative care were managed, which was later expanded to facilitate the care of six patients.

Dr. Singh had the ability, and drive, to convince decision makers that Interior residents were every bit as deserving of optimum neurosurgical management as those living in the lower mainland. Though he served terms as Chief of Surgery in Kamloops, and as President of the Kamloops Medical Society, he also served as President of the B.C. Medical Association, President of Medical Staff, and held a position with the Canadian Medical Association. Remarkably, all while researching methods of improving patient outcomes, as evidenced in intracranial pressure monitoring.

When he retired in 1993, Dr. Singh turned his energy to improving life for all in the community. Through his connections as a member of the Rotary Club, and his ability to interact with people, he spearheaded a two year No Smoking program in the local schools. Working with teachers, nurses and respiratory staff, Grade 2 classes in the area were taught the ill-effects of smoking through an age related presentation.

When asked why he donated so much of his personal time to provide expertise on projects, and working for organizations in the community, he humbly replied, “This community has provided me and my family with a wonderful life and opportunities. I like to give something back.” Even an unsuccessful run at provincial politics didn’t stifle his drive. He continued to assist surgeons in the operating room, provided consultations, and increased his awareness of the post acute care difficulties that people with brain trauma, strokes and/or tumors experience after discharge.

In 2003, Dr. Singh turned his efforts to fundraising, and in 2004, combining his medical background and love of sport, Singh started the Annual Invitational Gur Singh Golf Tournament specifically to raise funds for the Kamloops Brain Injury Association. His support of the organization was due to the amazing assistance to survivors of brain injuries and their families that was provided post acute care, helping them reach their potential through specialized programs and education.

Dr. Singh’s enthusiasm, energy, determination and persuasion turned the golf tournament into a hugely successful annual event that has raised well over $1,000,000 for brain injury services. A further commitment to the association came from Dr. Singh and his wife, when they organized the Annual Dinner/Dance fundraiser during June, which is Brain Injury Awareness month. Tragically, in 2014 Dr. Singh was diagnosed with amyotrophic lateral sclerosis (also known as Lou Gehrig’s disease, or ALS).

One year after the diagnosis, he succumbed to the disease on March 24th, 2015. However, such was Dr. Gur Singh’s dedication to brain injury that one week before he passed, he insisted on presiding over a planning meeting for the 12th Annual Gur Singh Invitational Golf Tournament. “To say he was dedicated to those who had acquired a brain injury, would be an enormous understatement,” said Terry-Lynn Stone, Executive Director of the Kamloops Brain Injury Association. “He will be sorely missed by everyone: by his family of course, but also by the whole community; he was one of a kind.” Dr. Gur Singh is survived by his wife, Manju, son Arjun, daughter Sabina, daughter-in-law Marsha, and two grandchildren, Joss and Cella.